While the feed contains updates from every category (basically everything that has a date and doesn’t grow over time), this section is specifically meant for periodic updates of thoughts I had or what I’m currently up to. You can also subscribe to single tags, if you’re only interested in updates on specific topics.

Feed for all posts

I’m on a Webring Now


I finally was confident enough (and pleased with where my website is right now) to apply for a webring and got accepted last weekend. It’s the webring many Merveilles folks are featured on among other individuals. I don’t think it has a name, but it’s hosted by Devine Lu Linvega on webring.xxiivv.com. Feel free to explore the more than 140 websites featured there!

This webring is an attempt to inspire artists & developers to build their own website and share traffic among each other. The ring welcomes personalized websites such as diaries, wikis & portfolios.

What Even is a Webring?

The Wikipedia on what a webring is:

A webring […] is a collection of websites linked together in a circular structure, and usually organized around a specific theme, often educational or social. They were popular in the 1990s and the early 2000s, particularly among amateur websites.

That’s basically it in a nutshell. The particular one I am on now is not linked circularly, but acts more as an index for all member websites. A good examples for a circular one is the Low Tech Webring, where all the websites contaon a set of links, mostly in the footer, where you can go directly to the “previous” or “next” website, to cycle through the ring.

I like the small revival the webring idea goes through currently (at least it feels to me like it is). It takes me back to the times when the web was still new and exciting to me, and not full of bullshit as it is today. I don’t think I’m alone though, since personal websites seem to pop up again here and there, and projects like the IndieWeb seem to have their place as well.


Sometime about a year ago, I quit my subscription to music streaming services for good, and created a bandcamp account with the intention to buy music again. This had a significant impact on how I listen and relate to music.

While I still require a (mostly) instrumental playlist with calm yet engaging music for work, I enjoy listening through albums as a whole a lot more. This has a more deliberate feel to it than just switch on a “backround noise carpet”, and I also feel way more mindful when listening to music like that.

This relates to the last point. I used to discover new music using the “play music similar to” features that most streaming services provide. This is a very limited experience though, and also contributes to the practice of just mindlessly turning on some background music.
Also, those recommendations where usually pretty bad. And I tried a lot of them, believe me. What’s way more exciting is to just look up what label that last cool album was released on, and check out what other artists they publish. Usually the variation in genres and styles is much larger than of those recommendation algorithms, and also seems to span more criteria than these algorithms are capable of considering.

Discovering music is also more targeted. I am better able to just go explore a new style of music I know nothing about, or go on an adventure to find out what this vaporwave thing is about.

This is one of the downsides for me. I have not much discipline, and when I discover something new I really like, I need to have it. Just having a subscription for ten bucks per month was way cheaper than what I’m doing now, but I still don’t buy anything right away and look for good deals or discography wholesales.
At least I know that most of what I spend there is ending up in the artists’s pockets.

The universe on independent artists on bandcamp alone is so much larger than any mainstream streaming service can provide. Locking myself out of the streaming service’s convenience forces these endless options on me.

No More Need for Mainstream Music

I found myself listening to way more of these niche music, that I didn’t really listen to the mainstream music my collection contained from before anymore. The effect was so large that I just followed through and deleted large parts of it.


Sometime last year in autumn I planted a tiny garden into a jar to see how long it would sustain itself. I put in two plants, one of which isn’t really visible but still doing fine, in a layer of soil above some coal for filtering and a base of gravel for the roots and to collect water. 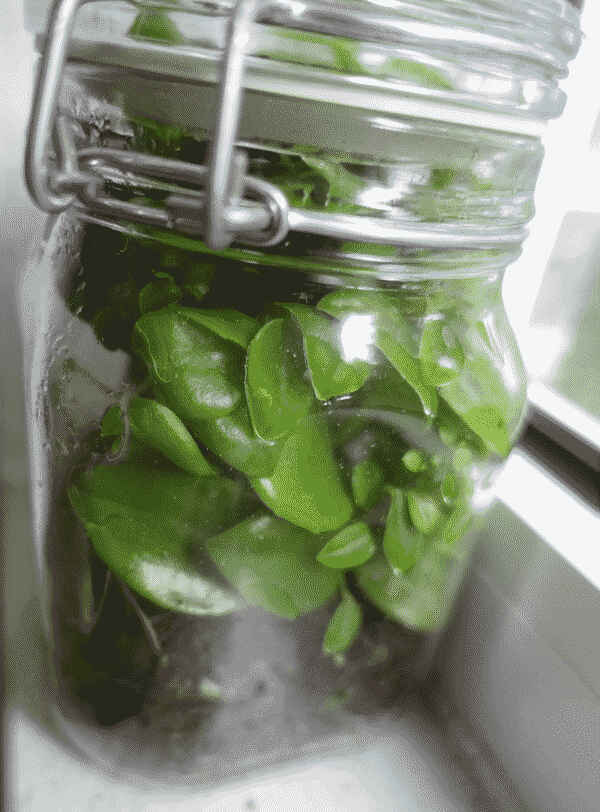 
The Merveilles are thinking out loud about another artistic jam, this time themed around programming graphics with Postscript.

Probably for reasons in my upbringing, I have kind of an internal resistance that prevents me from trying new things because of the “failure” it includes, comparing myself with the amazing work other indiduals have already done on that specific topic. Somehow in my head it always becomes a competition, which prevents me from starting at all since “there’s no way I can compete with that”.

Anyways, that’s not much different with this jam. Many other Merveilles inhabitants went off to create amazing pictures with Postscript, and I noticed that instead of feeling inspired and motivated to go and experiment myself, I’m feeling intimidated.
To overcome this inner resistance of mine, I’m trying to push against it and endure this uncomfortable feeling for increasing durations. I’m doing so by taking baby steps in existing Postscript tutorials and drawing basic shapes for now. It doesn’t look like much yet, but the process itself feels super rewarding to me.

So with this in mind, I proudly present to you, a triangle of dashed lines! 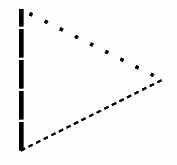 If you’d like to see the underlying code or check in from time to time, have a look at my postscript git repo. I probably won’t be accepting patches though ;)

This is the version I am most happy with for now and use everywhere I use the username irimi1. I made it in dotgrid, a minimalist vector tool.